Response-Ability: It’s Harder Than It Sounds

Whatever happens in your life, joyful or painful, do not be swept away by reactivity. Be patient with yourself and don’t lose your sense of perspective. ~ Pema Chodron

This morning, as I was getting ready, my dog, Jack, began to bark – loudly and incessantly. I was in the back of the house and didn’t want to deal with it. I got frustrated and found myself quite irritated. I should mention that Jack has a tendency to be a bit high strung and reactive (maybe I do, too). 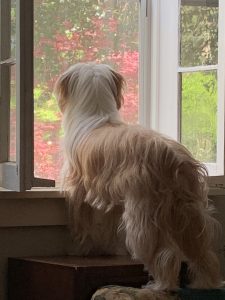 He didn’t quit barking even though I was quite diligent in my orders for him to “knock it off!” I stormed out of the bathroom and found him standing in the chair frantically barking out the window at four men in the yard. I also heard pounding on the roof and ladders being put against the house for the men to climb to the roof. I had totally forgotten that the roofers were coming first thing to start re-roofing the house. Poor dog was pretty sure they were invaders and were coming in through the roof!

Jack was doing what is in his nature to do. Interestingly, and embarrassingly, so was I. I was reacting to his reactions.

Here’s the deal, in this situation, I am the one that’s supposed to have the more sophisticated brain. As such, I have a lot more choice about my responses than does Jack. I should mention, he has some significant past trauma and is a certified scaredy-cat! It is what it is, and it’s not always easy with him – or for him. And in this instance, as far as he could tell, he was under attack! I, on the other hand, was only inconvenienced and annoyed.

As soon as I realized what was going on, I felt for the poor pup. Not only did he have to deal with this onslaught of workers and noise, but he also had my reactivity and my less than understanding tone (to say the least) to deal with. And, to make matters worse, I knew there would be several more days of incessant roof invaders – for both of us!

It never does. Not Jack’s, or anyone else’s. 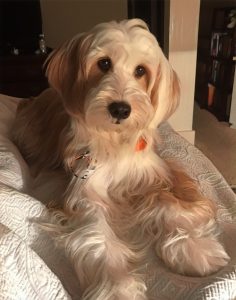 How many times have I been annoyed and reacted without thinking because someone else was reactive, frightened, and “barking?” Maybe they thought their “house” (or “safe place”) was being threatened. Maybe they were feeling “invaded” and didn’t know how to get out of the situation.

I once heard a teacher say that everything comes to us either as a friend or a teacher. Today, Jack came to me as both. I see where my work is – to notice my reactivity and then pause and reflect. Perhaps there can then be a more skillful way to respond rather than by just adding fuel to already raging fire.

ng you easy mornings, kind teachers, and enough information to do the next right thing.
Namasté
Augusta

All stories by: Augusta Kantra